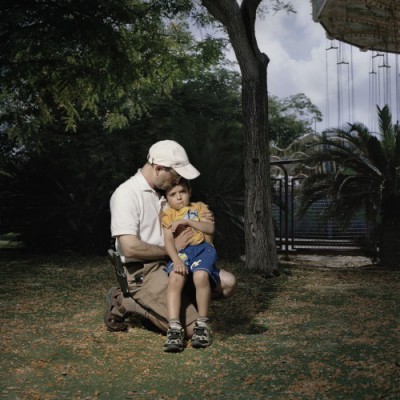 Barry and Jair
'Israel is an amazing mix of strong people with their roots all over the world,' says Barry. He came to Israel from the United States in 2000 to find a wife. He quickly found one, in the settlement Efrat on the Palestinian Westbank. ‘My wife's family was driven out of India,' he starts recounting her family history. 'From Iran they fled to Egypt and eventually arrived in Israel in the fifties. My grandparents come from Europe and moved to the US. Now I came back to the homeland.'
Barry now also lives in Efrat. 'From our house you can see a very old olive tree, which is still tended by Palestinians every day. It’s nice living with each other. We are now safe in our village; the army has strong positions on the West Bank. Even so, I carry a pistol. If Arab terrorists enter a village, they will first shoot my children, and then me. Now that I carry a pistol, I can prevent that. Not that I want to kill; Jews want to live. But look at the Arabs. The get so much money, but what do they built? Not hospitals, but missiles. Don't you think that's sick?'