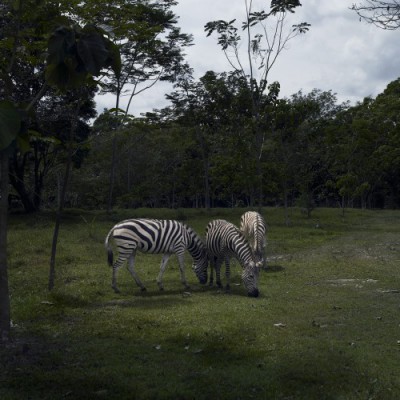 Pablo's Zebra's
In 1978, the Colombian drug lord Pablo Escobar bought a 3,000-hectare estate in the remote town of Puerto Triunfo, a three hours’ drive from Medellin, for around $60 million. Here, he entertained his guests and took them water-skiing on one of the artificial lakes. Escobar kept some 2,000 animals on the estate, including elephants, antelopes, buffaloes, zebras and hippopotami smuggled in from Africa. For his children he built enormous concrete dinosaurs. Seven hundred employees lived and worked on the estate. After Escobar’s demise, the estate fell into disrepair. Sixteen years after his violent death, the estate was opened to the public as an amusement park. Nowadays visitors are offered an eclectic collection of attractions as an African savannah, lifelike dinosaurs, wild animals, a butterfly garden and a visit to Escobar's former mansion, with on the drive his collection of boy’s toys: a hoovercraft, jet skis, rusty old-timers and his Renault IV.